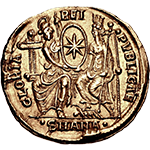 FORUM TAURI (Forum of the Bulls), also called the Forum of Theodosius was originally built by the Roman Emperor Constantine the Great (272-337), the visionary founder of the Eastern Roman Empire and its capital, Constantinopolis.

Following its completion, The Forum was inaugurated in 393 during the reign of Emperor Thedosius (347-395) and named after him.It still survives as the Beyazit Square of today’s Istanbul.

As the largest public square in antiquity, its size and grandeur reflected the imperial vision and power  of Constantine and his enterprise to create a New Rome (Nea Roma) in the East.

Symbollically, the Bulls (Tauri) were a manifestation of power, sanctity, vision, leadership and paradigm change…